The Blackmagic Cloud Store is a very fast high capacity network disk that's designed to handle large media files used on Hollywood feature films. The design uses advanced flash memory so it easily handles lots of simultaneous users. Plus it's extremely easy to set up! With Dropbox live sync, files can be distributed between multiple units globally for very fast local file access, even on lower cost internet connections. Unlike SAN systems, you don't need IT consultants and there are no subscription fees. There's even an HDMI monitor output with real time storage status! All this means you get much better features than discount storage products sold at office supply stores.

Blackmagic Cloud Store is the perfect network storage solution for any use! But it's perfect for film and television where large media files need to be shared between multiple users for editing, color correction, audio post and VFX work. It even handles massive 12K Blackmagic RAW digital cinema files! Each user gets zero latency and they don't need to store files on their local computer. It's the perfect solution for DaVinci Resolve! Dropbox sync allows multiple disks to be synchronized in different locations globally. Then each location gets the fastest editing experience possible. That’s critical for multicam editing where multiple media files are playing simultaneously!

Unlike IT industry storage products that are rack mounted and have loud cooling fans, the Blackmagic Cloud Store is an elegant vertical design that's portable. It's also whisper quiet so it can be used on location. Internally it has an array of flash memory cards working in parallel for speed and data protection. There are even 2 redundant power supplies! The four 10G Ethernet ports operate as a switch so you can connect four separate computers, or they work together using "link aggregation" for a massive 40G Ethernet speed. There is also an HDMI monitoring output so you can watch a live graphic view of the storage operating on a TV or monitor. It can even be maintained and repaired!

The Blackmagic Cloud Store is available in 20 TB, 80 TB and massive 320 TB models, so you have lots of space for all your business files and video media. With video the standard for information delivery in business, that's enough capacity to store all your media in a single location on your network. M.2 flash memory cards are used for extreme reliability, high access speeds and zero seek times. Plus the M.2 cards are arranged in parallel RAID 5 groups so they can operate much faster than a single card. That ensures massive speed combined with fault tolerance. If a faulty M.2 card is detected, the cloud store will automatically enter read only, so you can still access your files.

With support for Dropbox sync, you can use multiple Blackmagic Cloud Store units to share files globally. That’s extremely important when working with large datasets or massive digital film and video files. These files need to be constantly accessed dozens of times a second, so most internet connections are too slow to handle it. While the internet has too much latency to access large files remotely, you can use it to sync these files. Syncing the files to local storage totally eliminates delays in accessing them. That's because everyone has a local copy of the files on their network. Blackmagic Cloud Store will constantly sync files, even if your computer is turned off!

The most exciting feature is the HDMI monitoring output! Simply connect a TV or monitor to see live status of the Blackmagic Cloud Store! The storage map shows a graphic representation of the memory core and where the read and write access is happening for the connected users. It’s quite mesmerizing to watch! There are also four graphs that show you the data transfers on the four main 10G Ethernet connections. The main space indicator shows you the capacity of the memory core and how much is currently used. You can also add a custom name to the store! The status for each Dropbox connection is also shown. It's even possible to see connected users and the power supply status.

for Mission Critical Use

Modern laptop computers are so thin, they often don't even have an Ethernet connection! That means you need an adapter to connect to an Ethernet network. These adapters are annoying and they make it harder to just plug your computer into the storage to grab a file. Blackmagic Cloud Store has a USB-C to Ethernet adapter built in and you can access it simply by plugging your computer into the USB-C port on the store. Plus USB-C cables are much nicer than stiff Ethernet cables! Once you have connected the Blackmagic Cloud Store USB-C connection to your computer, you have an Ethernet connection to the store! That means you can just plug in to quickly grab files when you need them urgently!

The two USB-C ports on the Blackmagic Cloud Store can be used for loading and backup of files. If you connect a media card reader or a USB-C disk to the ingest port, then all files on that disk will be loaded into the cloud store. This means you don't need to tie up computers just to load files. Backup is also important and while Dropbox is a good backup solution, by connecting a USB disk to the backup port, you can do local backups without any ongoing costs and with total privacy. It works with a USB-C disk, or even large USB-C disk arrays. The latest files will be loaded first and the Blackmagic Cloud Store will keep backing up for as long as the disk is connected.

Blackmagic Cloud Store is easy to repair by a service engineer, even though it’s not a rack mount design! The design is based on a core chassis that attaches all memory PCBs and power supplies. This means various assemblies can be unbolted from the core chassis and replaced. The memory core is made up of M.2 cards arrayed on interface PCBs, with each M.2 card represented by a fault LED so you can identify and replace a card. Plus Cloud Store runs Blackmagic OS and applies wear leveling, so each M.2 card won't see excessive data writes. You can see any card faults on the utility and the HDMI monitor output. The utility also lets you run a rebuild on the memory core once a card is replaced. 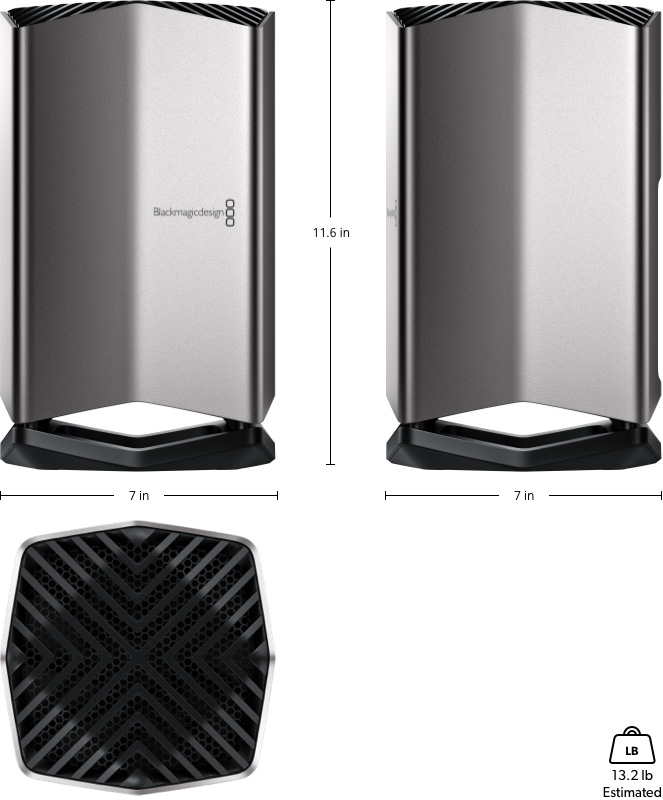